In an earlier post I discussed the importance of the artist Paul Drury and made mention of some of his early prints made while he was a student of Goldsmiths College in during the early 20s. The information following is an overview of an important book written by Jolyon Drury on the etching revival during this period and gives the reader a rare insight into the work of Drury and his colleagues.

Revelation to Revolution: The Legacy of Samuel Palmer
The Revival and Evolution of Pastoral Printmaking by Paul Drury and the Goldsmith's School in the 20th Century. By Jolyon Drury
This book describes the revival of pastoral printmaking by the group of etchers who were students at Goldsmiths College in the 1920s including Paul Drury, Graham Sutherland, William Larkins, Edward Bouverie-Hoyton and Alexander Walker. It traces their influences, the evolution of their technique and this group’s later development through the eyes of Paul Drury. It is also a tale of the close and complicated relationship between Drury and his father, the sculptor Alfred Drury RA, and of their artist friends and colleagues representative of their age spanning a little over a century. 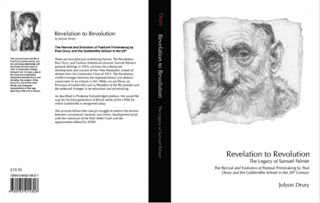 The Goldsmiths group’s interest in Samuel Palmer coincided with the first important exhibition of his work at the Victoria and Albert Museum in London in 1926, when these young artists were picked out for working in a similar but more contemporary style merging Palmer’s ideas with the approach of F.L. Griggs from fully two years before. This testimonial greatly assisted the group to early success, with their impressions much sought after in the American market. This account follows Paul Drury and the Goldsmiths group’s careers through their early success, through the set-back of the Depression, through their revival in the 1930s, through the Second World War and through the revolutionary 1960s. English printmaking flourished as result of this turbulent period with Drury guiding the R. E. through major reforms to reunite the generations and styles of printmaking into the cohesive body that it is today.

To find out more or to place an order for the book please email:
ronald.mcburnie@jcu.edu.au (in Australia)
jolyon.drury@btinternet.com (in the UK)